Gemstone Luster: The Guide to Understanding How Gems Shine

Gemstone Luster: The Guide to Understanding How Gems Shine 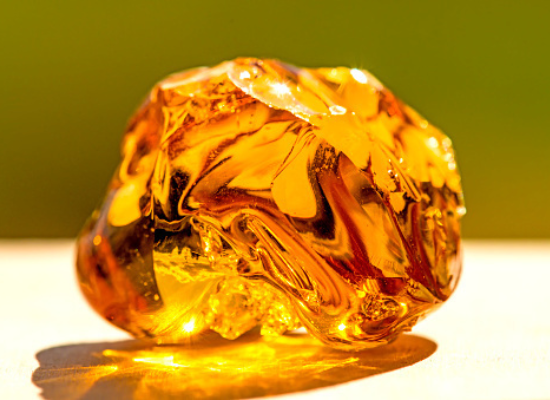 Gemstone luster is one of the most important factors to consider when purchasing a gemstone. It can be difficult to understand, but this guide will explain everything you need to know about how gemstones shine. We’ll discuss the different types of luster, as well as how to spot quality stones based on their luster. Let’s get started!

What is gemstone luster?

Gemstone luster is the way a stone looks when light hits it. It’s usually described as how “bright” or “shiny” a stone appears. It is derived from the Latin word “lux”, meaning “light”. Luster is affected by the stone’s surface as well as its internal structure. The more light that is able to reflect off of the surface of the gemstone, the higher the luster will be.

The critical distinction here is the word ‘surface’, as the light that enters into the gem and then bounces back out is known as “brilliance” instead. If light enters the gem and is split into a rainbow of colors, it is known as “fire” or “dispersion”.

Furthermore, the same gemstone might have different types of luster based on its origin, formation conditions, and a variety of other factors. Therefore, it is far from an exact science.

The concept of luster in gemology.

Despite being a basic component of minerals, luster can change even within a single crystal. You could see variations depending on which face of the crystal you examine due to the mineral’s state of aggregation.

Gypsum, for instance, may have a pearly luster on surfaces parallel to the cleavage yet a vitreous luster on some crystal faces.

Additionally, the gypsum would display a silky luster if it was found in aggregates of long fibers. So, it’s possible that luster won’t be a helpful diagnostic feature for recognizing gypsum or other gemstones!

Some gem species’ lusters may be referred to as ranges. For example, serpentines may have resinous, pearly, or waxy lusters. Sphalerites can range from resinous to even adamantine. In addition, some gemstone lusters have “sub-types.” These terms describe gems that are close to the main luster type.

For instance, andalusite minerals are sub-vitreous gemstones, but chromite is a sub-metallic gem. Vanadinite, monazite, and stolzite are examples of sub-adamantine gems.

It takes some subjectivity to describe the luster of a gemstone. This further restricts it from being used to identify gems.

Why is luster important?

Adamantine Silky. Greasy? Gemologists use various evocative terms to describe gemstone luster. This refers to the appearance of a gem’s surface when it reflects light.

There are two basic categories of luster in the mineral world: metallic and non-metallic. Sub-metallic, an intermediate kind, is also occasionally used as a description. However, the non-metallic types are what the gem industry deals with most frequently. The majority of gemstones don’t meet the requirements for metallic or sub-metallic luster.

This term describes gemstones with a brilliant, mirror-like appearance, like diamonds. Diamond and zircon have a gorgeous, sparkling luster known as an adamantine luster. Adamantine literally means’ diamond-like’. Ruby and Sapphire are sometimes described as having a “sub-adamantine” luster in some cases, though many are classified as vitreous. 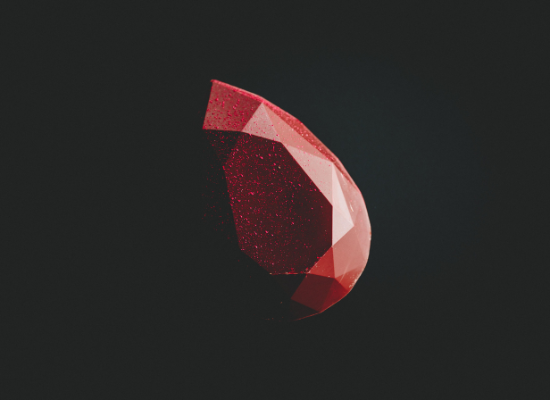 The most common luster type found in faceted transparent gemstones is similar to that seen from a pane of glass and is known as vitreous luster. Most gemstones, including popular jewelry species like Emerald, Quartz, Topaz, and Tourmaline, have a shiny, “glass-like” luster. Vitrum is the Latin word for ‘glass’, from which this term is derived. In some reference works, you may encounter “glassy” as another term for this type of luster. 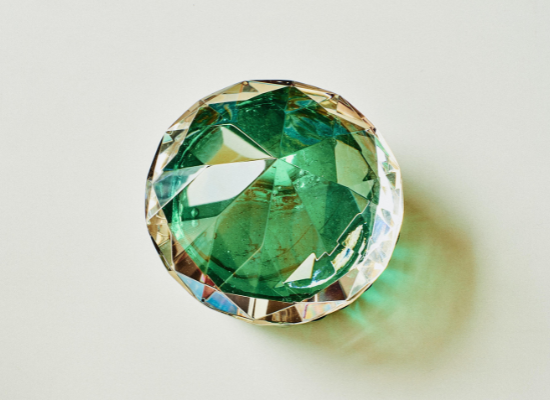 Gems with this type of luster have an appearance similar to that of organic pearls and mother of pearl. Some may even show iridescent colors on their surfaces, like the orient of pearls.

Their appearance is caused by microscopic layers within the stone, which reflect light in an unusual yet beautiful way. Gypsum and charoite are examples of pearly luster. 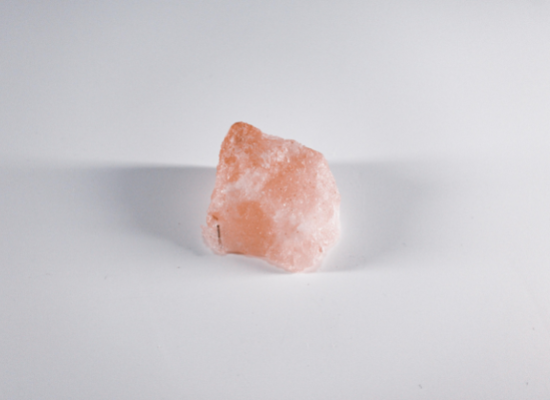 Gems with a silky luster have very fine fibers (just like silk) which are arranged parallel to each other. Malachite and sillimanite are both said to have a silky luster. 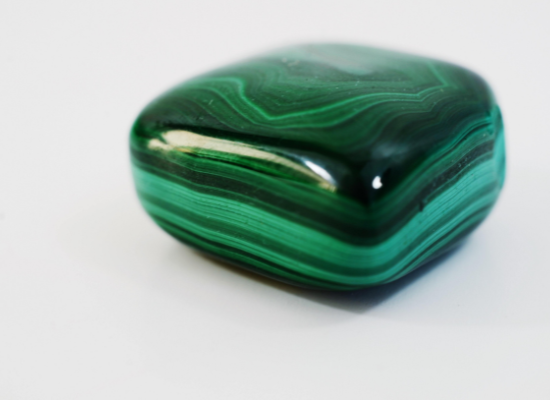 Gems with a greasy luster seem to have a layer of oil or fat on their surface. Examples of this luster include graphite and green serpentine. This is caused by a mass of microscopic inclusions within. Greasy luster is a characteristic feature of Garnets, Alexandrite, Peridot, Opals and certain Rubies. They can even feel greasy to the touch. 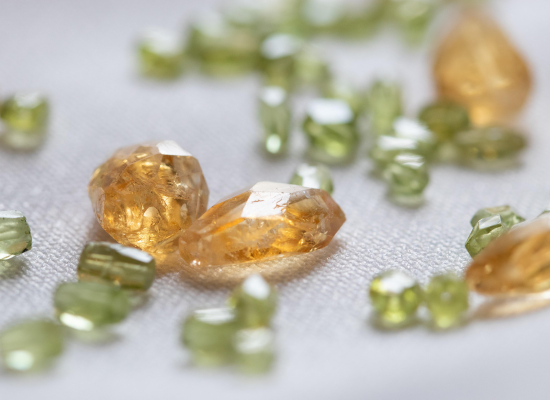 Resinous luster is comparable to the appearance of resin or smooth plastic. Amber is one of the most well-known gems with a resinous luster, which makes sense given that it is classified as a plant resin. Others include sphalerite, sphene and vesuvianite. 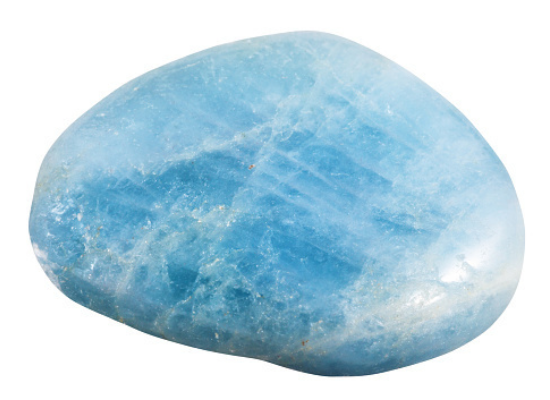 A dull luster simply means a gemstone reflects very little light. This is often because the stone has a coarse surface, scattering light in all directions. Kaolinite is one such example. 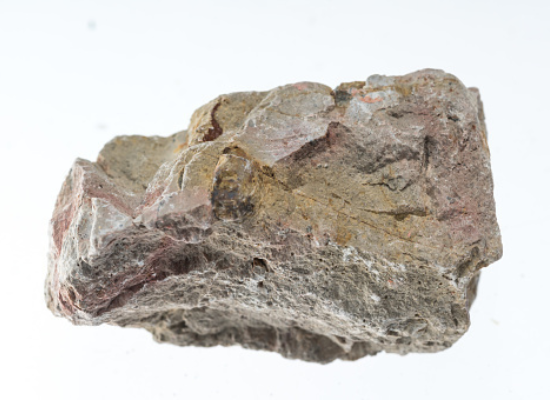 Metallic luster, a reflective metal-like appearance, is a term not often used for gemstones. Hematite, however, is a notable exception. It has a brilliant, metallic gleam and gem cutters have fashioned cameos and beads from it. 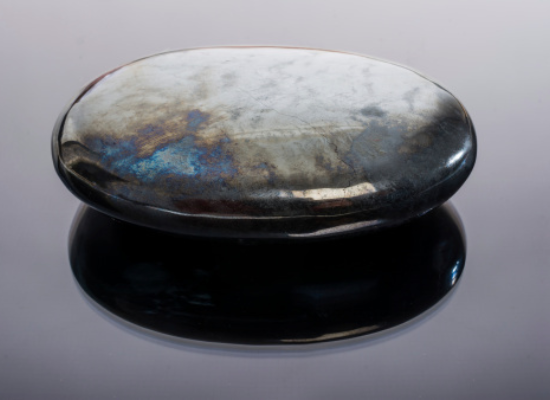 What is polish luster and fracture luster?

A gemstone’s polish luster, or how it appears after polishing, can be very different from its base luster. For instance, polishing can turn jet, which has a dull or waxy base luster, into vitreous.

The appearance of a gemstone’s fractures when they reflect light is referred to as their fracture luster. This may differ slightly from its base luster in some species. Sub-adamantine fracture, for example, may occur in vitreous spinel.

Did you know that glittering refers to the luster of the gold or the quality of the light that is reflected from its surface? The gleaming sheen of polished gold contrasts sharply with the dull luster of raw gold, which barely reflects when compared to its brilliant metallic luster.

Hope you enjoyed this quick guide to gemstone lusters! Stay tuned for more informative posts on the wonderful world of gems and jewelry. As always, feel free to reach out if you have any questions or comments. We’d love to hear from you!

What is your favorite type of luster? Let us know in the comments below!